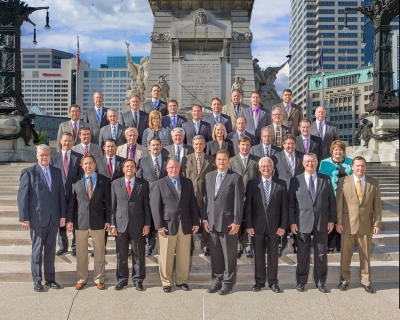 We had an assignment a few days ago, to photograph a corporate group at the Indianapolis Soldiers and Sailors Monument on the Circle. On our downtown walkabout, which we often take after work, we decided to check on the lighting at 5:30pm on the “Circle” a few days before the scheduled group photograph. Lo and behold, the scaffolding that has encompassed our Monument since November was now even worse, engulfing our Monument…the background for our group! Then we remembered that we had in our archive both sides of the monument without the scaffold. What a break!

On the day of the group photo,  it was a pretty contrasty day so we set up to White Lighting strobes with 7″ reflector with diffusion one on each side of the camera which was bolted to a Little Giant ladder 8′ up. Of course this light helped lower the scene contrast by filling in the shadows but that same strobe light had less effect on the highlights. The strobe used outdoors will always have more visual effect to make the shadows lighter then the highlights. I am usually the stand-in and also meter the scene and read the color temperature to plug those numbers into our Nikon D4. 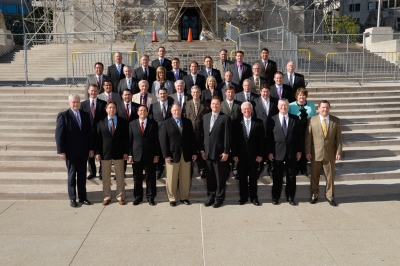 As you can see from the initial group photograph we had scaffolding behind the group. Fortunately we had that stock photograph of the monument which we were able to merge with the group photo. The customer was very pleased. We will see them next year.

P.S. We added the clouds as icing on the cake